Call for Papers
“Revised Commemoration” in Public Art: What Future for the Monument?
RACAR special issue to be published October 2021 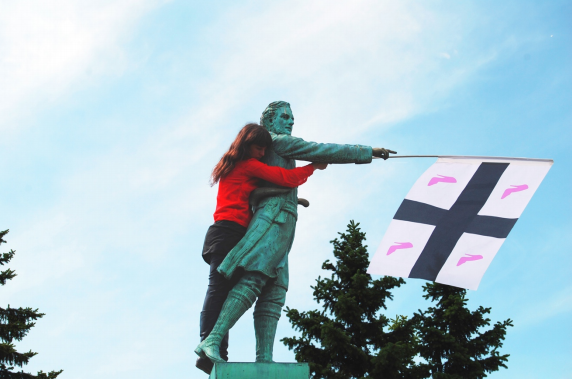 The current debate on the functions, forms and content of public monuments has caused disruptions in academic, political and associated circles. As art historian Annie Gérin (2019) explains, this debate is particularly connected to a growing societal malaise concerning different colonial, totalitarian and religious heritages. Important to this debate are claims to identity based as much on knowledge as on beliefs, ideologies and emotions that not only confront one another in a struggle for legitimisation, but also reveal historical tensions.

Over the past several years, episodes of “revised commemoration” have been witnessed around the world: in the United States, South Africa, Belgium, Australia, Poland, and Canada, to name a few. This global movement has included a series of popular and institutional gestures and actions directed at certain monuments that aim to de-commemorate or adjust, or even to complete, representations of the past that contravene contemporary values. In addition, while many of these interventions are directly linked to traumatic heritages that concern Indigenous and African populations, they also open the door to claims from other groups and point to the underrepresentation of ethnocultural or gender diversity in commemorative landscapes.

This thematic issue aims to offer a critical and multidisciplinary examination of past and present commemorative artistic practices in order to draw concrete lessons for the future of commemorative public art in the broadest sense. It also seeks to explore artistic, legal, identity, historical, and economic implications of “revised commemorations”. We are particularly interested in deeds and actions that take the form of acts of vandalism; permanent, temporary or ephemeral artistic practices; and curatorial practices that go far beyond a direct action on monuments to focus on processes of repair, restitution and inclusive rewritings of history.

The call is open to analyses and case studies from all geographic and cultural areas that will not only shed light on the current commemorative crisis, but also rethink its practices. The articles might address, but are not limited to, the following questions: what is required to reconcile official representations of the past with the affirmation of contemporary values? When or how is it necessary to proceed with monuments commemorating controversial or disputed ideologies or figures? What are the future prospects for “the monument” following a “revised commemoration” process?

Please submit your proposals of a maximum of 250 words and a short CV by January 15, 2020, to Analays Alvarez Hernandez (analays.alvarez@umontreal.ca), Marie-Blanche Fourcade (marie-blanche.fourcade@museeholocauste.ca), and Lucie K. Morisset (morisset.lucie@uqam.ca). If proposing an account of practice or portfolio, please include 2-5 images.